How to talk about your “appointments” in English

Appointments are an integral part of Dutch life and having to plan get-togethers far in advance is typically Dutch. Some foreigners find this hard to adapt to in the beginning. They say it lacks spontaneity, especially those foreigners who come from the lower latitudes where things are a bit more spontaneous.

I think this is reflective in our use of language: an appointment is something that has been scheduled properly far in advance with one person. A get-together with just one friend at a time seems pretty common in Dutch culture.

However, many times (in other places) social events are not usually planned out so far in advance and frequently happen with groups of people rather than just one. You don’t make an appointment with a group of friends– you get together.

There are so many types of appointments to be made that in English they don’t all fall under one word.

You can use appointment if the meeting is professional in nature, or if you are consuming a service: an appointment at the dentist.

If it’s romantic in nature, then it’s a date.

If you’re in a very formal situation and have to excuse yourself without giving a real reason, you can say I have a prior engagement.

However, more casual situations use a completely different sentence structure in English.

If you’re meeting friends then you say: I’m getting together with friends tonight, like at a café. 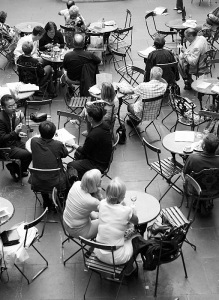 If you’re going to grab a beer with some colleagues, then you say: We’re getting beers after work, want to join us?

An appointment in both of these instances sounds stuffy and proper.

You can use a general expression (I have plans) or you can be more precise about your plans.

I’m having dinner with a friend on Tuesday night, can we do Wednesday?

We’re going to the movies on Friday–do you want to join us?

We’re going biking on Saturday if the weather’s nice.

Ik heb an afspraak. =  I’m meeting someone. I have plans.

Bonus tip: Don’t want to say what you’re doing or where you’re going and you’re young (at heart)? Try “Got to go, I’ve got a thing (later).”